Xiaomi Redmi 5 Plus comes with 5.99 inches IPS LCD Display with 2160 x 1080 pixels screen resolution. It has a 12 MP camera on the back and 5-megapixel front camera for selfies, featuring with Geo-tagging, touch focus, face/smile detection, HDR, panorama. Xiaomi Redmi 5 Plus BD Price is 17,990 Taka.

Xiaomi Redmi 5 Plus powered by 3 GB of RAM and Octa-core 2.0 GHz processor. It comes with 32 GB internal storage which upgradeable up to 128 GB by a standard MicroSD card. This dual-SIM phone supports two nano sim.

The smartphone has a 4000 mAh Li-ion battery. Xiaomi Redmi 5 Plus powered by  Android 7.1.2 (Nougat) and no java supported. The dimension of the phone is 158.50 x 75.45 x 8.05 mm and gross weight is 179.50 grams. This smartphone comes in two colours Gold and Black.  Fingerprint, Accelerometer, Gyro, Proximity, Ambient light sensor available on this smartphone.

Chinese multi products maker xiaomi co-founded by eight partners on 6 April 2010. Xiaomi logo stands for “Mobile Internet” (MI). Currently, they produce smartphone, Tablet, Smartphone accessories, network routers, TV, Laptops, and others MI home appliances. The company CEO said xiaomi never compromise the component quality and performance compared to other premium smartphones. He also interested to create remarkable hardware, software, and internet services for and with the help of their Mi fans. Xiaomi announced that in 2014 they sold 61 million phones and become a global brand by expanding their business in different countries.

Hope you are satisfied with our Xiaomi Redmi 5 Plus Bd price, specifications, offers & reviews. If you are one of the user of Xiaomi Redmi 5 Plus please don’t forget to drop a review on the above reviews tab. It is very important to us to know the performance of the smartphone. 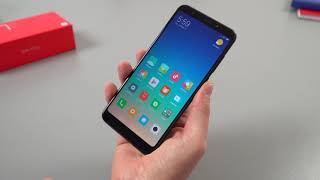